Embracing the bad guy: Ryanair’s social strategy is landing in all the right places

If you’ve been anywhere near Twitter or TikTok in the past few months, chances are that you’ll have seen some of Ryanair’s social content.

Whether it’s a witty joke about a celeb, a customer clapback or a snarky comment on the result of an F1 race, it usually leaves people guffawing.

They’re becoming known for their meme-style videos and their internet ‘savagery’ – it’s even created the rise of a whole genre of YouTube reaction videos, showcasing people reading their tweets out loud and commenting on them.

They’re the bad boy on the block, and it’s paying off.

At our last check, they reach an average of 111 million people monthly through organic activity. In comparison to another beloved brand Twitter account, Innocent, that’s a +106 million difference.

But all that reach and engagement doesn’t necessarily translate to bums on airline seats… right?

Despite their unapologetic and cutting responses, Ryanair’s content is clearly resonating with their audience in all the right places.

Of course, we can only see anecdotal commentary through our tools. But plenty of Ryanair content has individuals commenting saying that they will now fly with the airline because they’ve been entertained by witty clap backs on social.

Whether that activity translates into sales remains seen. But it will be seen, because the team now has a section measuring social media awareness in their customer satisfaction survey. They’re clearly working hard to showcase exactly what that earned reach means for their businesses’ bottom line. It’s a case study we can’t wait to read.

But just how have they pulled it off?

Some detractors have taken to LinkedIn to suggest that Ryanair will need an emergency landing soon – highlighting the old adage that the customer is always right, and that not all attention is good attention.

The haters claim that there’s no particular genius in a strategy that puts humour at the forefront, and that a short lived bout of attention won’t make up for negative customer sentiment built up over time.

It’s a school of thought that absolutely has backing, but we respectfully disagree.

For all intents and purposes, Ryanair seems to have got everything exactly right. And we can’t see it slowing down any time soon.

It starts with having their objectives at the heart of their social strategy. They’ve been very clear that their aim is to be the most talked about brand on social media – not just in the aviation industry but across the board.

So that means taking it seriously.

It might look like everything is a happy accident, but it’s actually a perfectly crafted strategy that works because of two key principles: they know their channels, and they know their audience.

Flying in the face of criticism

The Ryanair team know their offering inside out – cheap and cheerful flights that are meant to get people from A to B for the lowest possible cost.

They know that they have add-ons upon add-ons, and that you’re pretty likely to find crushed up pringles in your seat when you board because of the 25-minute turnaround time.

Instead of hiding away from that, they’re up-front about it. They highlight the fact that they want to cut costs, and pass that cost saving onto their customers. They call it choice – giving their customers a build-your-own flight experience, with nothing promised but the seat and a safe arrival.

Instead of promising to do better, they’re asking people to expect less. They’re attempting to change the perception of budget air travel across the board.

And every time they go back to a customer complaining about something, it’s chipping away at the opportunity for other customers to assume they can ‘cancel’ or ‘shame’ the airline for exactly offering what they said they were going to, right at the start.

They see the benefit of calling out a ‘Karen’, who may have a dozen people in the comments agreeing with her about baggage costs, because that snippy response reaches 7 million people and gains thousands of likes.

This takes a level of brand confidence and team understanding that’s often rare in companies of their size and scale. A fearless approach to being who they are, every time.

It all started with TikTok and their now infamous Plane Face filter.

The team experimented with pushing the boundaries at a time when air travel was essentially grounded due to Covid-19, and it took off.

People started to talk about them, so they continued to trial it through a test and learn approach. That approach paid off time and time again, so soon started to bleed into other channels and is now their hero strategy across the board.

Then the imitators arrived.

Duolingo have admitted they were inspired by Plane Face and used it as a springboard for their own successful strategy, giving their owl mascot a life of its own. However, there are many brands that don’t see the same success.

Every day, brands of all sizes are jumping in using the same tactics and seeing either limited engagement or outright ridicule. In their failure, they’re cementing the original as the best and helping to drive more engagement and reach for Ryanair instead. 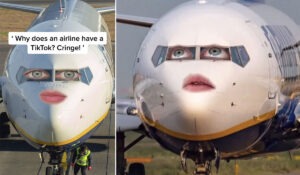 Not everyone can land it

So why does that strategy work for Ryanair, and not the others?

Because it’s not just about mascots and fun filters, but about a culture that goes from the cockpit through to the cabin.

It’s about a team that has successfully gained the trust of the board and C-suite employees, and are able to operate without restrictions. They’re able to be really reactive, in the truest sense.

They’ve often said that their content graveyard – often lauded in corporate worlds as the place that their best ideas live – is near enough empty. If a comment or a tweet is seen as being ‘too far’, they re-look at it, re-work it, and go live with it.

In fact, their Head of Social has said the only two topics that are totally off limits for them are safety and operations – which leaves them with a whole world of content that they can tap into.

That doesn’t mean they don’t learn from their mistakes, or that they’re not looking for ways to improve things – they’re working on a TikTok 2.0 at the moment which is actually leaving Plane Face behind, apparently – but it does mean that they’re able to give their audience what they want, when they want it, in a way many other brands cannot.

In it for the long-haul?

It’s hard to say, but we certainly think there’s a strong case suggesting that Ryanair’s bad boy persona will be ruling the social media skies for some time to come.

Swapping rage for relevancy: Did Facebook’s algorithm just get… nice?
Moving Content in the Age of Social Media
Cringe is power