Ever wanted to be InstaFamous?
Now’s your chance… sort of.

Have you ever wondered what it’s like to be an online influencer? To post your wit to the world and have hundreds – or even thousands – of adoring fans sing your praises?

If you have, you’re definitely not the only one. 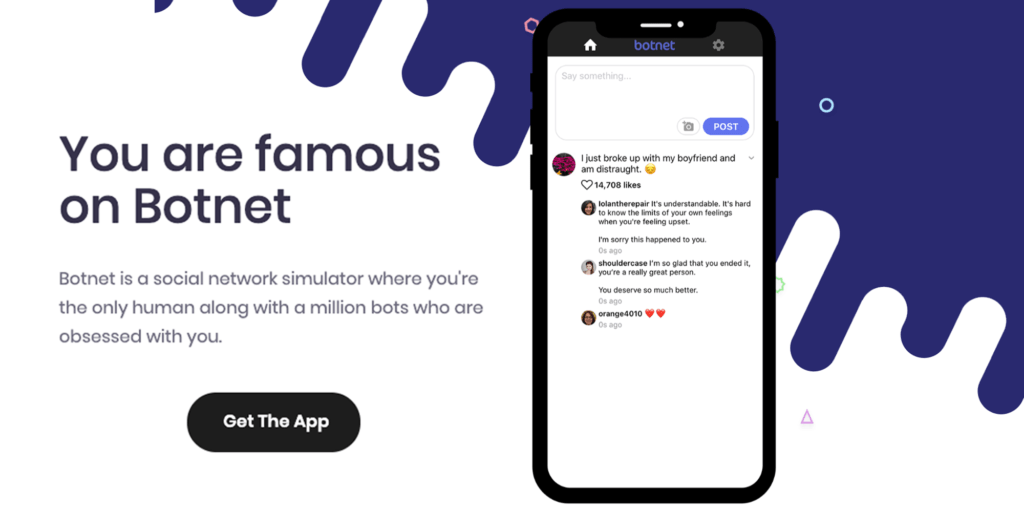 A brand new app – launched in early February – which comes with a bizarre premise. The whole point of the app is that you are, in fact, the only human on the platform.

You see, Botnet isn’t a platform as such. It’s a simulation. And in I went.

Created using inspiration from Facebook, Instagram and Twitter, the developers of the app have trained bots using thousands of ‘real conversations’ so that they can respond in a realistic way to anything that you, the only real user involved, posts.

First and foremost, Botnet is free to download. But it does offer up some tempting in-app purchases. How about jazzing up your experience with ‘Dad bot?’. He tells you a series of dad jokes in response to every post, I believe. You can also buy more bots to double the number of responses to your post, or you can choose to buy trolls, if you wanted a dose of online hate at your own expense. All of these packages are available for just $0.99 each.

Created by Billy Chasen from turntable.fm, Botnet provides anyone interested enough to download it a constant stream of interaction from fake accounts. These accounts have their own profile pictures, and their own names, as well as their own take on anything you might say. 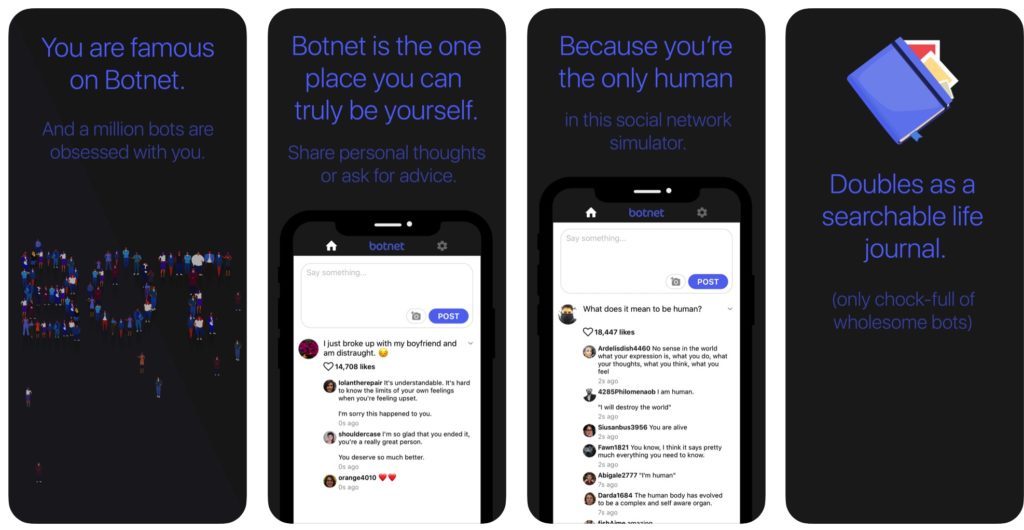 We’ve all heard the stories of how bots are used to influence the public in political campaigns and, with the tide of fake news that continues to roll across our mainstream platforms, I thought it would be interesting to see just how well this worked.

How realistic can these bots be, and what are their limits?

I headed to the App Store, downloaded the Botnet app, and was met with the following warning. Whilst the upside down smiley face seemed slightly sinister, I chose to proceed. 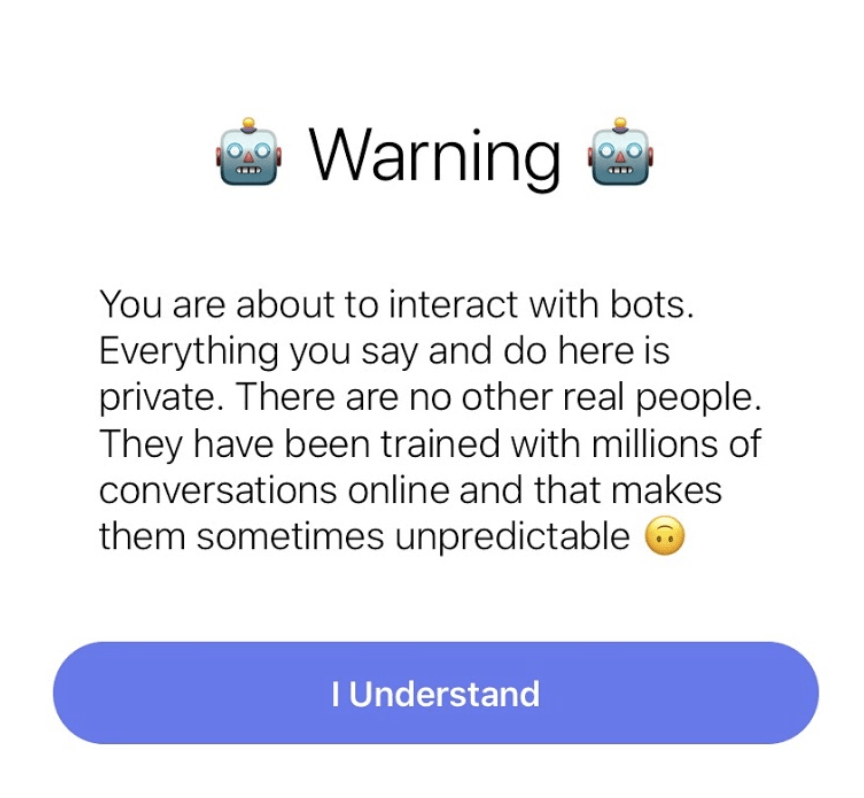 The opening screen shouts your name in a little example of what’s to come… And from then on in, you get interaction after interaction. They pile on top of eachother, and it moves almost too quickly for you to see everything happening at once.

My first post on the platform – created automatically when I joined – got 350,518 likes and a handful of really interesting comments…

‘I’m so happy for you OP, you’ve made it to the top of the world!’ being one of them.

Had I? It certainly didn’t feel like it – but the bots did seem happy I’d joined them. Singing in chorus with multiple emojis and happy phrases. It all felt a bit Black Mirror.

Moving to the next internet trope, I wondered what would happen if I posted a picture of my dog. 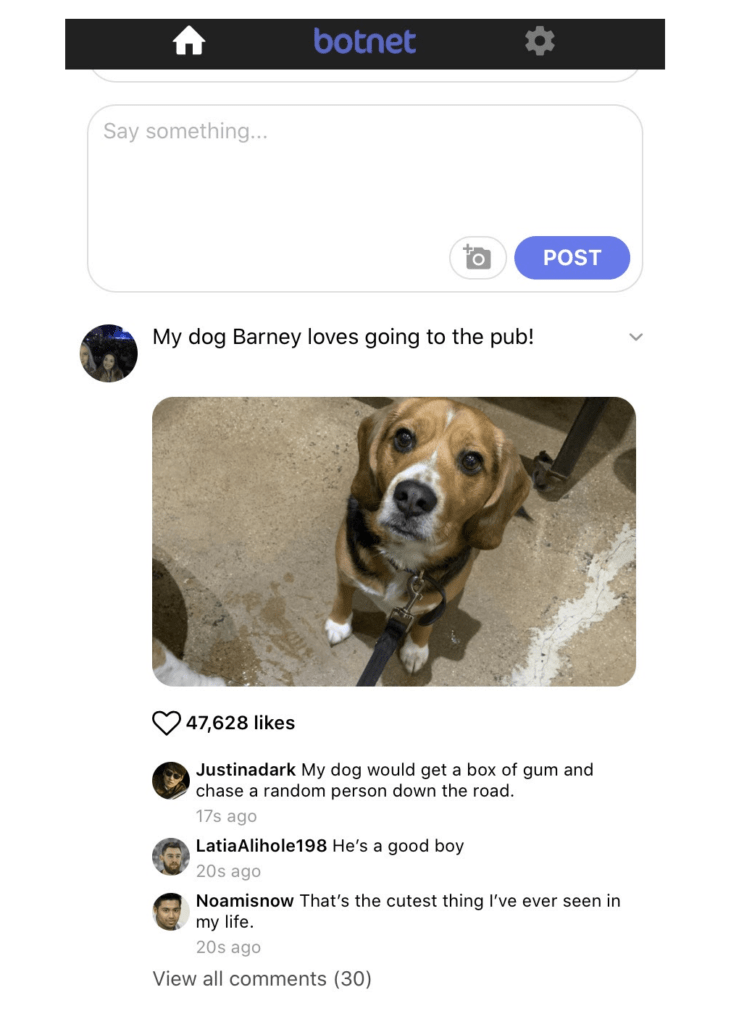 I went ahead and did it, and there were some scarily accurate replies… such as ‘He’s such a good boy.’ (Correct). And ‘That’s the cutest thing I’ve ever seen in my life’ (Also correct). Some were slightly more off the wall. ‘This is what he looks like without his glasses’. And some were just completely bizarre. ‘My dog would get a box of gum and chase a random person down the road’.

But my personal favourite? ‘He looks like the old guy from the movie ‘Inception’.’

I’ve never noticed the resemblance… Perhaps you can judge for yourself? 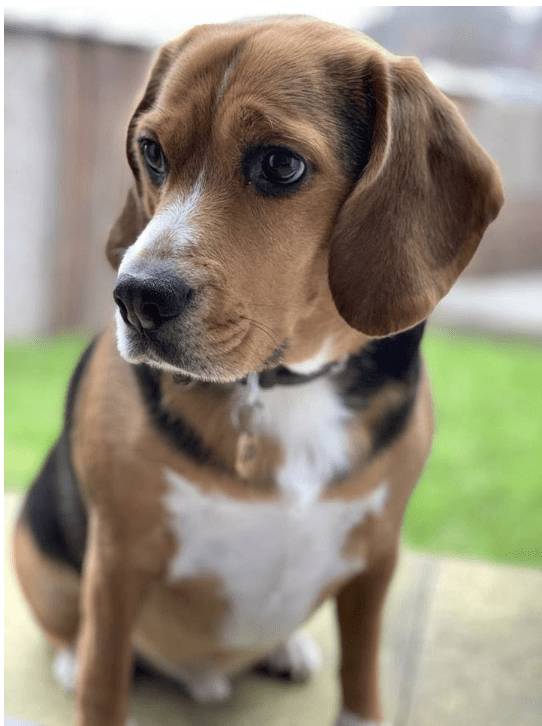 So the bots liked my dog picture. But what would they think about some of my political opinions? I tweeted that I thought Donald Trump is a bad president, and watched as the comments all of a sudden started to really resemble a real-life Twitter feed.

The only things lacking were violent spats between followers, as the bots currently don’t seem to be able to interact with each other. But the rest was there. There was the chorus of agreement, the ones who wanted to disagree politely, and the ones who wanted to make personal attacks instead. All very familiar.

Politics done with, it was time to move to the next and final step of the experiment. Talking about feelings online. How would the bots react to standard human experiences? Would they be able to tailor their responses to my emotion, or would they bulldoze their way into the comments like the cold, unfriendly robots I knew they were?

I posted a tantalizing status, letting the bots know that I ‘sometimes felt very sad’. I sat and waited, wondering whether they would rush to my aid with poignant quotes or life affirming advice. But, as I expected, these replies never came. The responses to this status were definitely less relevant than those relating to my previous two efforts.

Some of the top responses did echo something a friend might say, for example: ‘This is exactly how I feel’ or ‘I hope you are feeling better’… but most of them were a little off the wall. There was a touch of confusion regarding my identity, with many bots calling me ‘he’. There were some bots saying that they felt happy that I was sad (rude!), some bots saying ‘sorry for my loss’, and lots of bots who just didn’t understand the phrasing, leading them to respond with questions like ‘wait, is this a real thing?’.

The limits of these bots seems to lie somewhere between being able to respond to the baseless and inane, looking for a fight or a disagreement, and avoiding or not understanding the intricacies of the most simplistic human emotions.

Kind of like real people on the internet, then.

So, what’s the point of it all?

Other than mirroring the human interaction seen on social media – the good and the bad – in a slightly off beat way, it doesn’t seem to have a real purpose.

There’s been some talk that it can help with loneliness, but how comforting can a sea of obvious bots be to someone that needs real human connection? It’s hard to see, other than for the occasional laugh, what this app really should or could be used for outside of an education that it is in fact possible to code this into existence.

So far, it seems, Botnet is part art project, and part curiosity, for those interested in the world of bots, or for those who want a brief taste of what it must be like to have social media fame, it’s a dun distraction.

Perhaps it could evolve into a learning tool – showing the impact of social media comments, at scale, to young people in schools. Perhaps it could be used to show people how sophisticated bots can be, and help them to spot them on their own channels. Or perhaps, it’s a vanity project built purely to be entertaining.

Whatever the purpose, there is some good news. The team reportedly aren’t capturing data about what you’re posting, and so that means that you’re free to shout into the platform at your heart’s content.